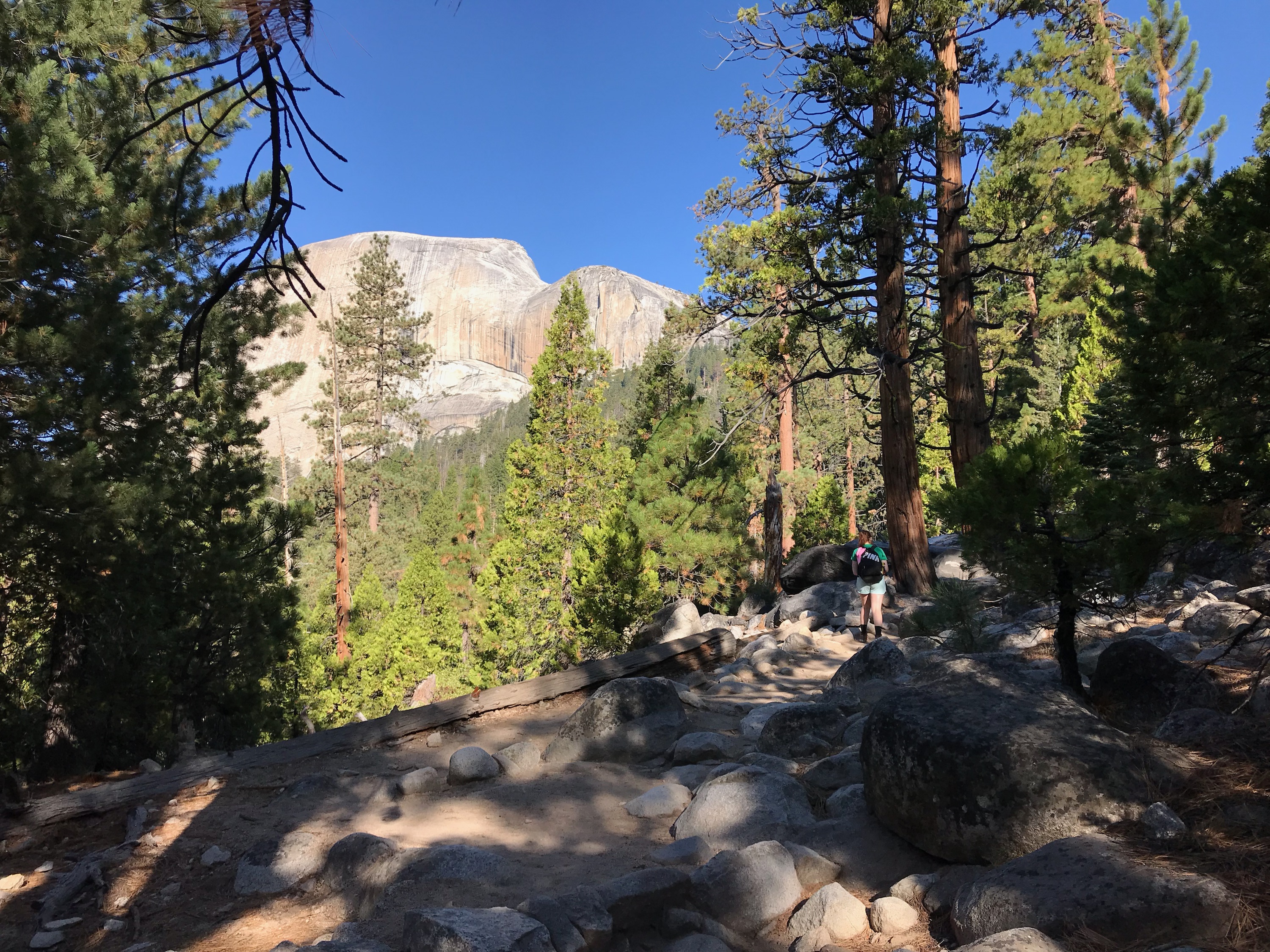 Half Dome and The Fear of Heights

I can’t resist a good Harry Potter reference in my title!

I’m going to get real with y’all here. A couple of weeks ago, my dad, sister, and I went to Yosemite to climb half dome. They were so excited about it, but I was always a bit apprehensive. My knees aren’t the best and I knew there would be a lot of stairs, I have asthma so climbing a mile into the air (when you’re already starting at ~4000 ft in elevation) didn’t seem like the best idea, not to mention I have very little upper body strength to pull myself up on cables for the last 400 ft of the hike, plus a debilitating fear of heights. Yet, the three of us set out to accomplish this feat.

With my brand new hiking boots on, we started our climb at 4:30 AM, seemingly the first people on the trail. Maybe an hour or so into the hike, the first group passed us. They were very chipper and it was clear they were in much better shape than the three of us, who were struggling up the first of many long sets of stairs. But we made it up. and we kept walking. And walking. And walking. More people passed us, we never passed anyone. But this is not a hike to be comparing yourself to other people, so we didn’t let it bother us. Hey, slow and steady wins the race, right? 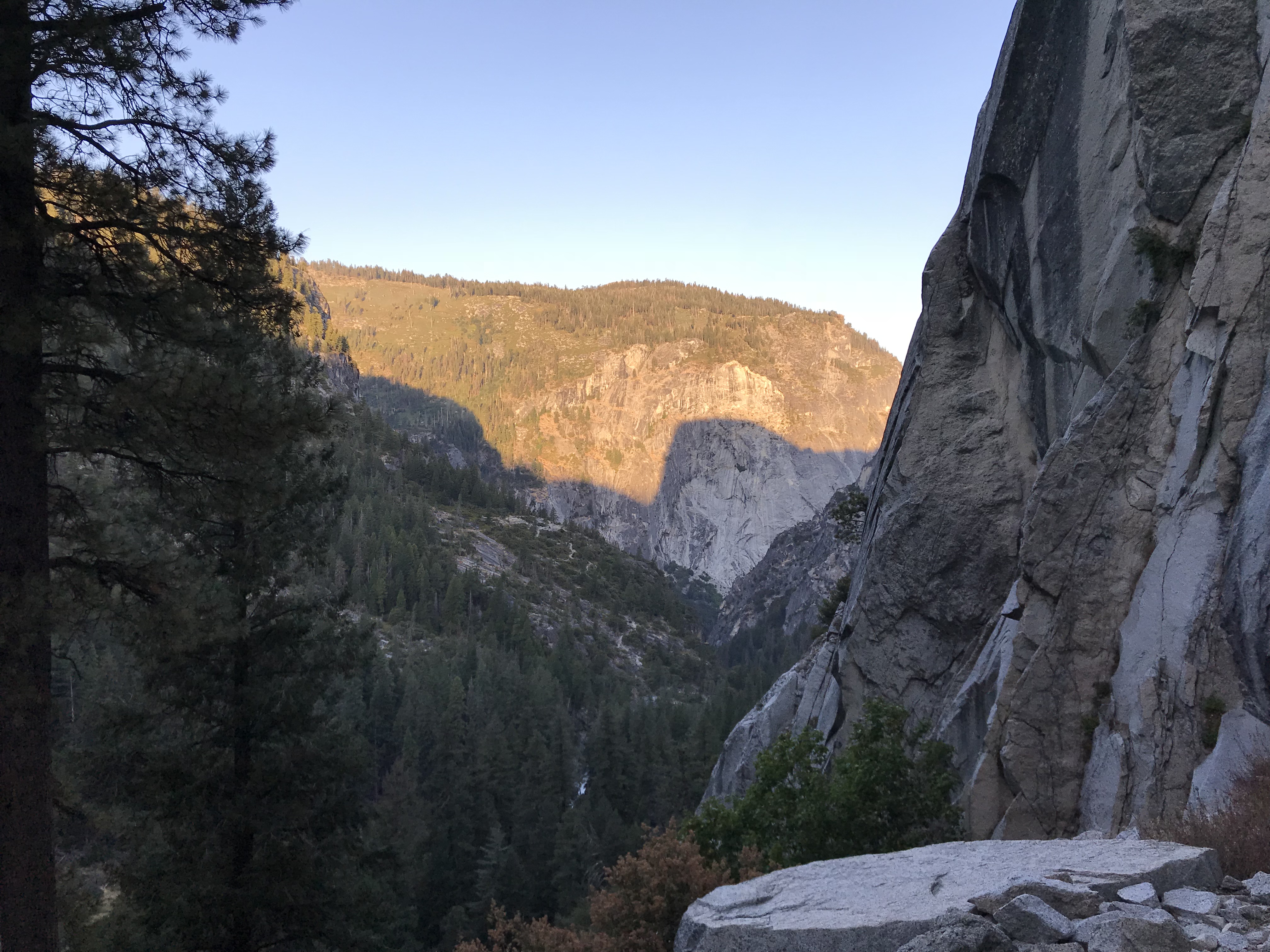 The morning shadow of Half Dome.

Finally after 7 hours, we can see subdome. Subdome is just like half dome, except instead of pulling yourself up on cables, you’re walking up stairs carved into the rock. Totally exposed, no trees. 8,000+ ft in the air. And it’s windy. Well, just looking at sublime made me start crying because I was so terrified. Like I said earlier, DEBILITATING fear of heights. My dad (who has done this hike before ~30 years ago) tried to reassure me that it was ok and told me it wasn’t as bad as it looked. From where I was, it looked awful, There was no railings so these people could literally fall at any time. So we continued on and at the base of subdome, through my tears, I told them I wasn’t going up. So I find a nice quiet spot to sit as my family climbed subdome. 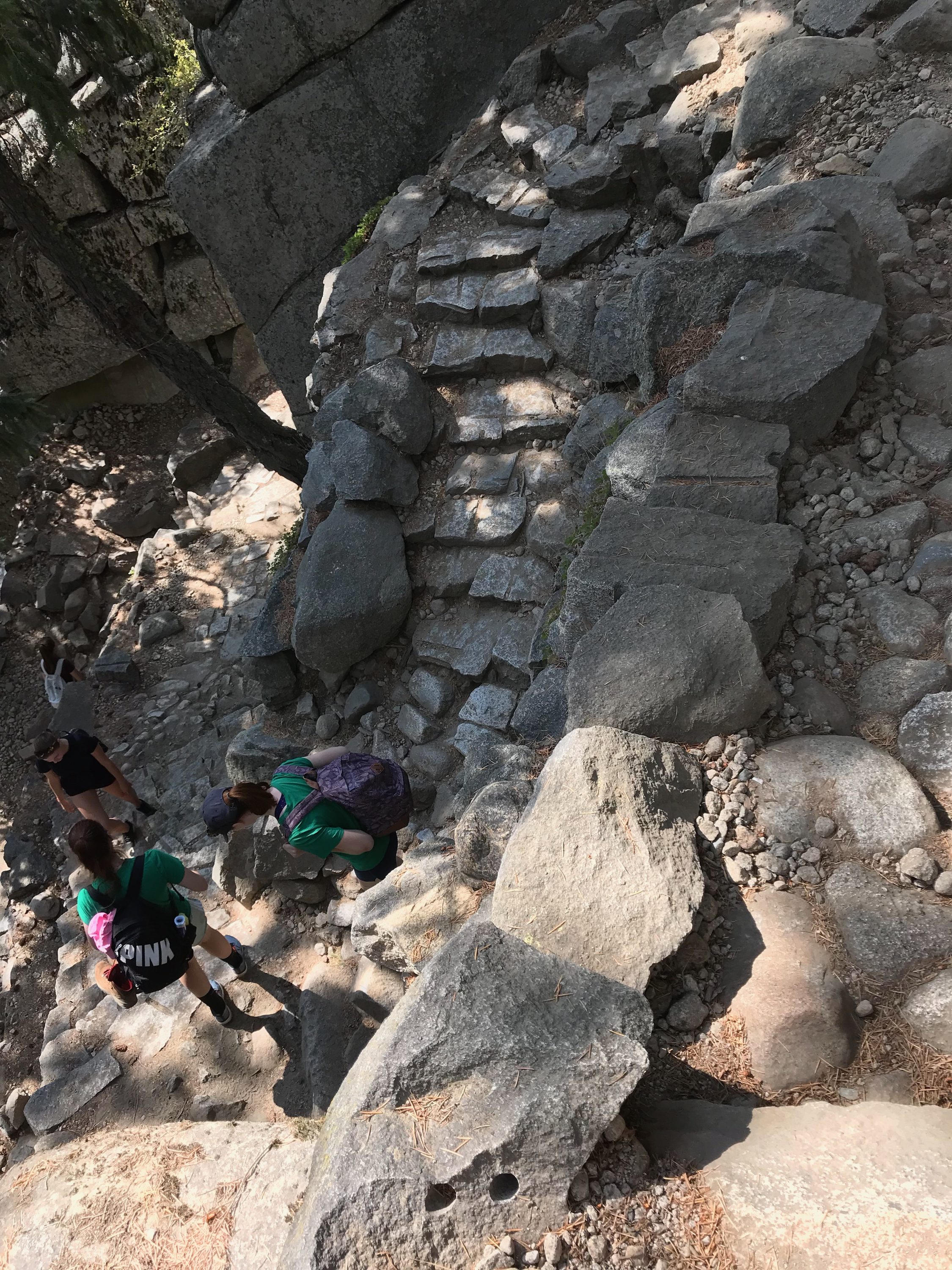 One set of the many stairs we climbed.

I watch my dad and sister make their way up, stopping to catch their breath every few sets of stairs. The whole time I thought to myself, “It would be really great if I could make it up subdome and be standing there at the bottom of half dome when they come down from their climb” and I talked myself out of playing it safe. I start climbing up the stairs, crying to myself because I don’t want everyone around me to know (thank god for sunglasses!), and try to avoid my family seeing me so I could surprise them (we were wearing matching green shirts, so it was easy to pick each other out). I move to the side, clinging to the rocks, as people climbing down pass by me. Yes, it is not wide enough for two people, which added to how scared I was. After some time has passed, my dad sees me and waves. He’s sitting down catching his breath, feet dangling off the rock. I’m terrified for him just looking at him. They wait for me as I make my way up and offer words of encouragement. I yell at them to stop their talking because I could not deal with that at the moment, I was focusing on not losing my life.I make it to them and we all climb up together, but about halfway up, the stairs stop and it’s just a sheer rock face to climb. I stop dead in my tracks and try to convince myself I can do this. After about 8 minutes, I finally make it up the 15 foot stretch of rock only to find out that this is how the entire rest of the way is up to the base of half dome. I sit down for maybe 15 minutes because there is no way I can continue going up. I know myself. I know my limits. I know my fears. I definitely pushed past them to get to that point, but exhausted all fake confidence I had created to get to where I was. My dad wouldn’t let me stay there or go down alone, but the permit to climb half dome was in his name and he needed to be there in order for my sister to use it. Giving her his license and the permit, plus the story of what just happened, my sister went up alone, while my dad and I went back down.

This entire time, I was not even able to take in the view without feeling like I was about to pass out and would only look up, or at the rock right in front of my face. My dad went down ahead of me and was able to clear the hikers coming up out of my way so all I had to do was look at my own feet. I never took my eyes off them. It took what felt like forever to get down, but it was only 20 minutes, which is still a long time on that rock! We get to the bottom and I breathe a huge sigh of relief! But the I remember my sister is all alone. Now she is a very adventurous person, always has been. She likes climbing things and as kids, she would climb and I would watch her to make sure she didn’t fall or hurt herself instead of joining her. You can say this makes me a worrier, and you’d be right. I start crying all over again (granted, I finally just stopped after getting down from subdome) worried about what would happen to her up there, if she would be ok alone, if they would let her still climb even though my dad, the permit holder, wasn’t with her; guilt washing over me. Only about 5 minutes later, I see her green shirt making it’s way down subdome. It hadn’t been enough time for her to have made it up, so my dad speculates that they must not have let her climb. I was so happy to see her safe and coming down, that the guilt doesn’t even affect me anymore. She makes it down in no time! I apologized for being the reason why she couldn’t climb, but she said they weren’t even checking permits!  Much to my relief, she climbed up, and after about a third of the way up realized she didn’t have the upper body strength to pull herself up either and turned around. 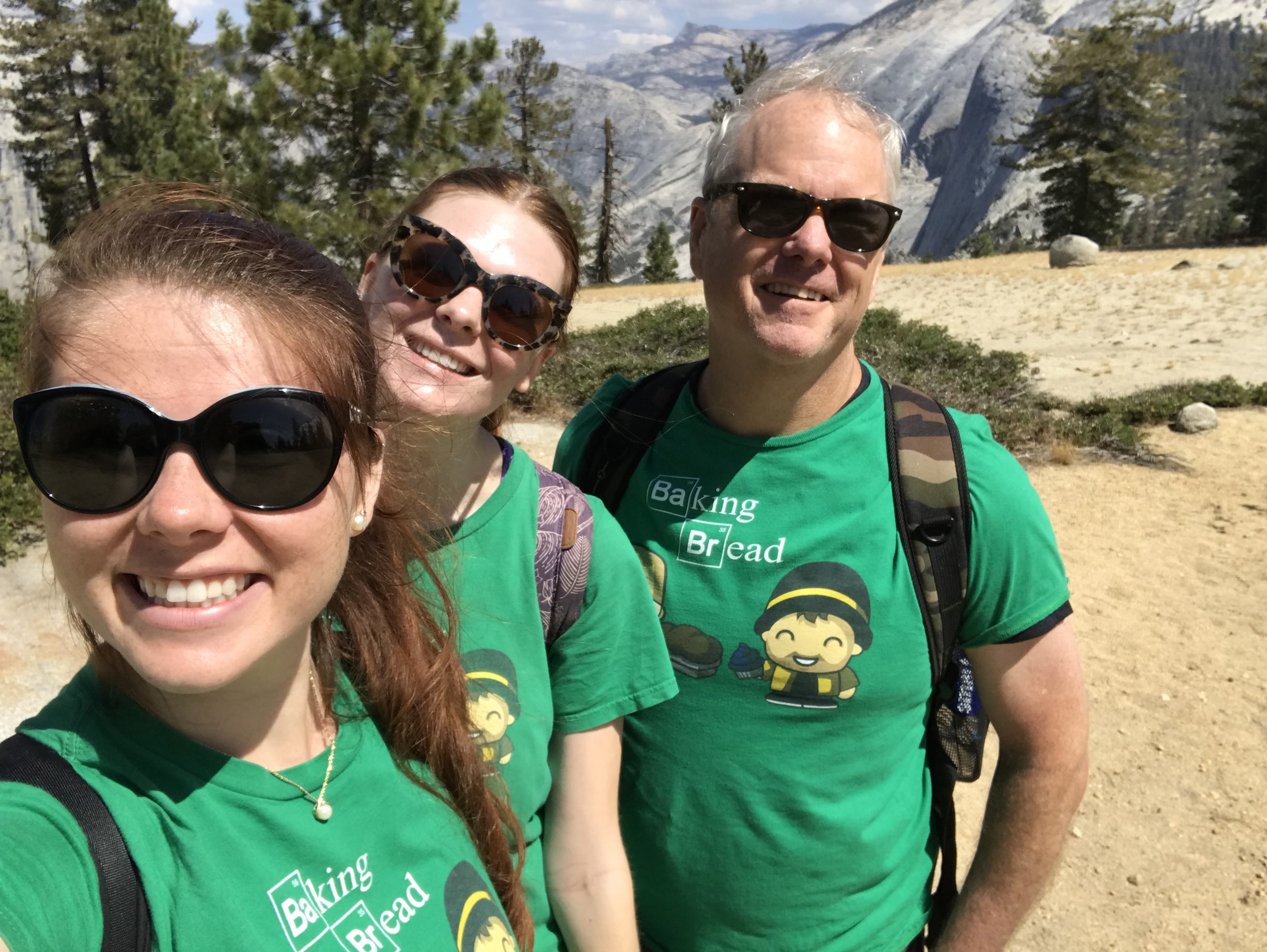 In front of a valley near the base of subdome.

We sat for a bit, ate a sandwich, took some pictures (see above) and turned back to go down the monster 7 mile trail we had just climbed up. In total, the hike took us 12.5-13 hours. We averaged a little over 1 mph for the entire hike. Now one of the reasons I used as an excuse to not go up subdome was that my knees were already hurting and we had enough stairs to climb down, subdome would just exacerbate it. And I was right. The hike down was far worse than the hike up. I remember laughing with my family because we had a great experience overall hiking, but there was not a single part of the hike that we will remember fondly. It was horrible, long, hot, my knees hurt. And I honestly thought I was going to dislocate one of them, if not both from the way we kept going down rocky, uneven stairs. 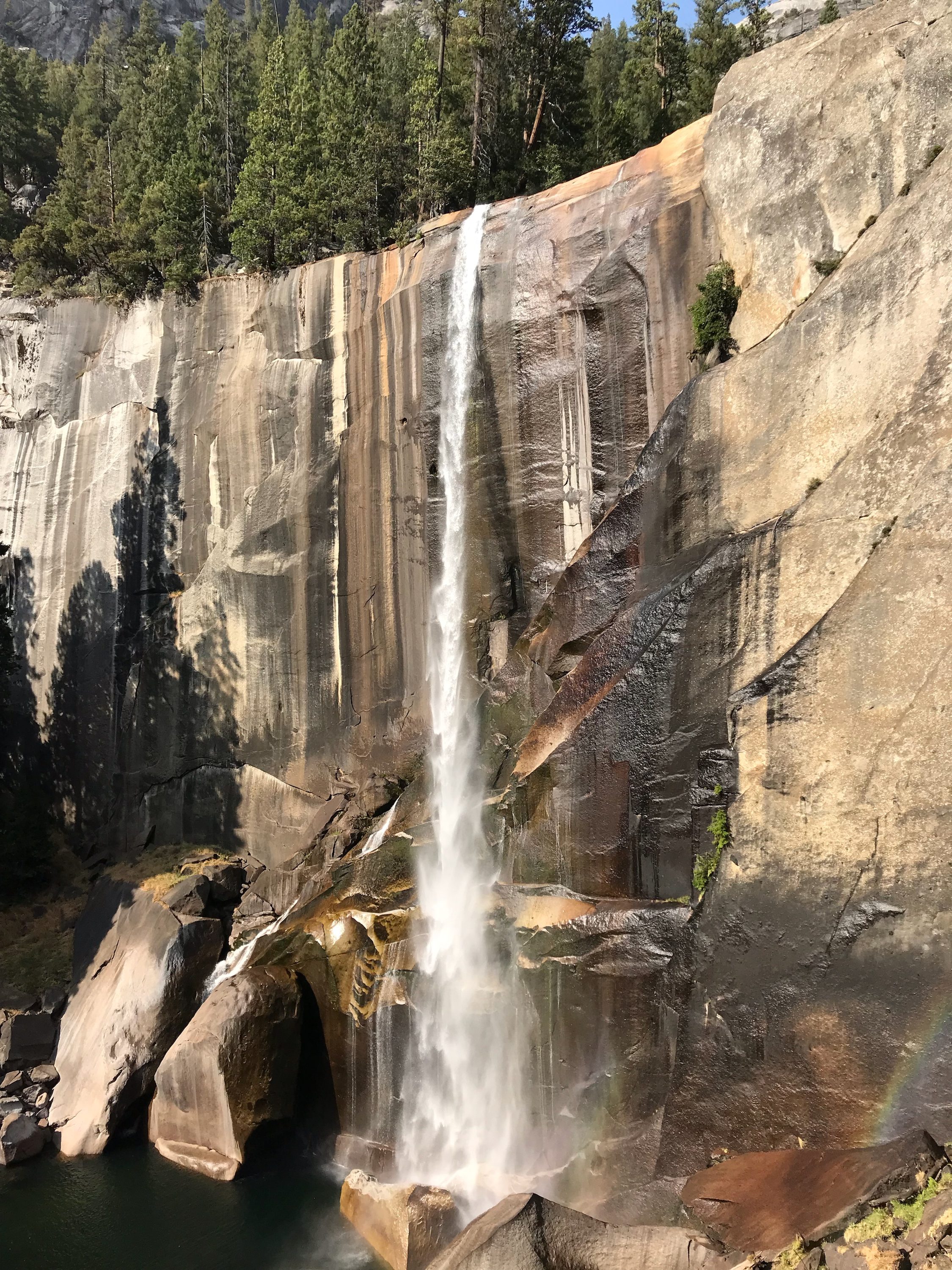 One of the few waterfalls along the hike.

The moral of the story is you can push yourself to do things far outside your comfort zone, and it’s also ok to know your limits and not continue. I am so proud of myself for trying to climb subdome, but looking back, it wasn’t the best idea to go alone. What if my dad hadn’t spotted me? What if I was just sitting on subdome alone because I couldn’t look away from the rock to make it back down? How would I have gotten down without my dad clearing people out of the way for me? But honestly, everything works out for a reason and I am so proud of myself and my whole family.