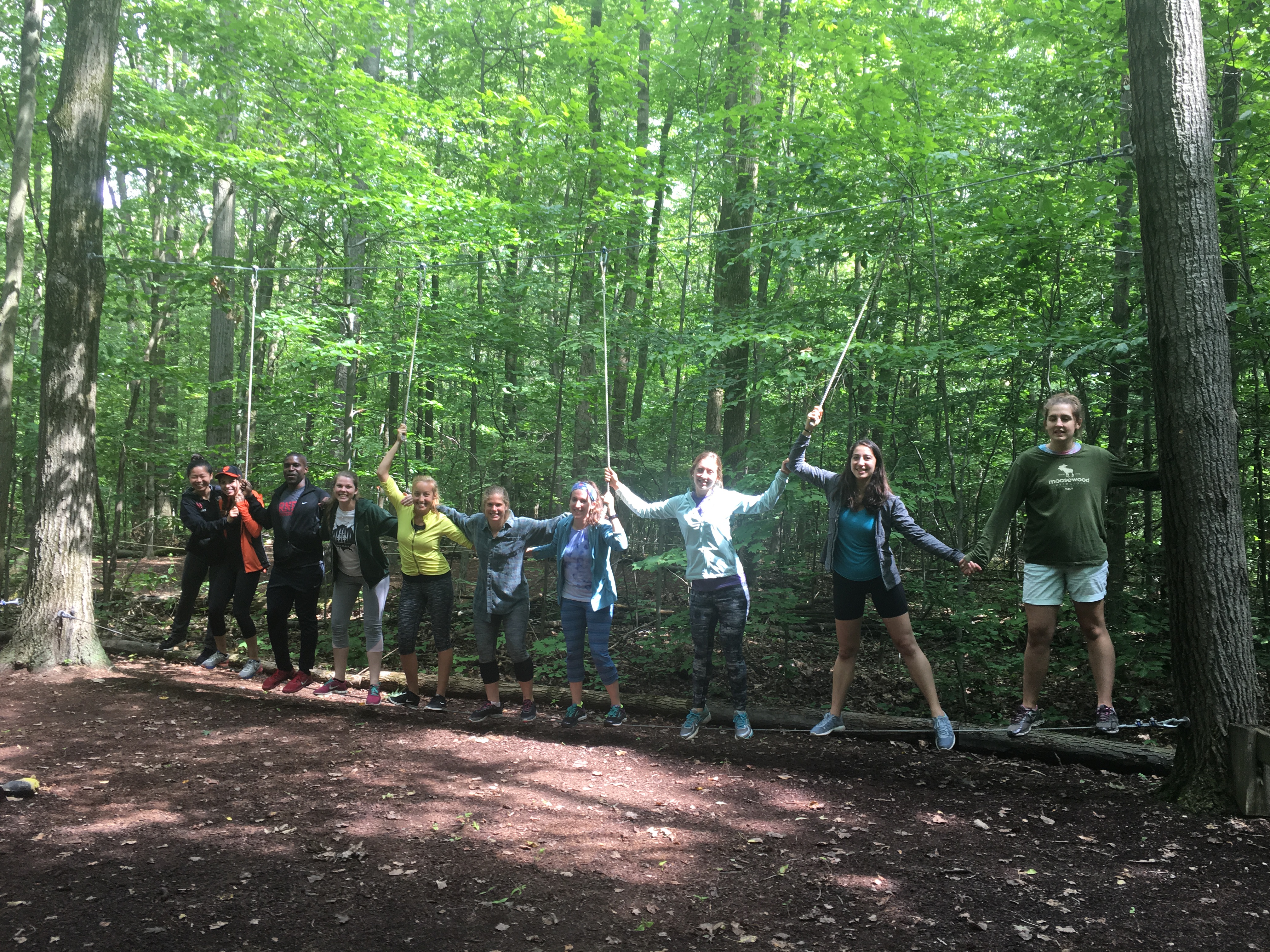 I am a month and a half into my internship and things have been crazy! Honestly, I haven’t wanted to post about it because I haven’t been doing very well and I didn’t want people to know that; I didn’t want to let down everyone who was so proud of me. But I wanted to make this for future dietetic interns to understand what an internship was like because I wanted something like this when I was applying, so I will not keep hiding the ugly side of it. Thank you in advance for dealing with this long post and for any future dietetic interns reading, grad school is way harder than undergrad and I’m not even getting a degree out of this, so prepare accordingly.

The second week of orientation went well, but again was long! We finished half a class in this two-week orientation so it was a lot. The ropes course we did was fun! I was so worried it was going to be a high ropes course, but we were never more than two feet off the ground. It was a great bonding experience and I was so impressed with how well we worked together to figure out how to complete it. We had an intro to the Lunch Labs we will be putting on, basically we make food for the other interns but it has to be vegetarian, feature a seasonal fruit and two seasonal veggies, and be relatively “healthy”. Two interns plan the meal and we all make it together. This time, we made eggplant curry, rice, and a strawberry rice pudding type of dessert. 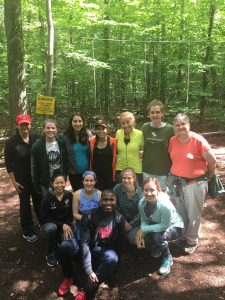 Once orientation was complete, I was so excited to finally start the internship. Every Monday we have two classes and then every once in a while we have to go to a seminar after class. Mondays are crazy long, I have an hour commute to get to Ithaca and classes are about three hours long. We have community in the morning, about an hour and a half for lunch (this is when we have lunch labs if they are scheduled for the week), and then research in the afternoon. We aren’t done until about 4 and then it’s another hour commute for me to get home.

Community is interesting and we’ve had some cool discussions so far! Research is also fascinating, but I have been struggling with that class. I would love to go into research for my career, but I have questioned that many times throughout the past 6 weeks of class. I think a lot of it is that the research we are learning about and completing is very social science-based, which has always been difficult for me to grasp. Give me hard sciences like biochem, organic chem, microbiology and it clicks; I understand everything. When it comes to people and sociology, psychology, anything other social science, concepts just seem to fly over my head. I have been working really hard to stay on top of all my assignments and for the first 4 weeks, I didn’t have a job, so I spent pretty much every free second I had doing work for this class.

The first assignment I got back was a B-. I do not get grades that low, it is not who I am, especially when I put so much effort into the assignment. Also, in order for the program to keep its accreditation, interns must have a B average. I spent weekly phone calls and meetings with my professor trying to fix my grades but they kept getting worse, despite my efforts. I took all suggestions, had multiple people look at my work, even the director of my internship proofread my paper, but my grades stayed stagnant and embarrassingly low. I cannot tell you how many times during those few weeks I considered dropping out. I cried over feeling like a failure pretty much every night. Everyone else seemed to understand everything. I would try to steer conversation topics away from that class and our grades because I did not want to admit how poorly I was doing. It was not until my professor asked me if there was something going on in my life (like a job) that was keeping me from giving my all to the internship. Since I had not yet started working I said no, but I did not even think how messed up my personal life had been. So much happened to my friends and me in that time period and I tried to not think about, but it had managed to affect my work. I am not going to lie after that question was asked, I sat around not doing anything that weekend because I did not think my grades were ever going to get better and if my effort was not showing in my work, why should I bother putting in any effort at all. Not the best mindset, but I really was not in a good place. I had also just started working, and I was sure I was going to have to quit after this week because there was no way I could improve my grades while spending less time on this class.

I was literally dreading going to this class after that weekend because I was so embarrassed to show my face with the grades I’ve been receiving. The assignment due that morning had vague instructions and I was positive I had not completed it correctly, but hey, at least I managed to complete something. The next day I received my grade for it and was terrified to look at it, so I waited until I got to work. Somehow, I managed to get an A-. Oh my god, it felt so great seeing that letter! I cannot totally remember, but I am fairly certain I started crying right before my shift started. That small little A- made all the difference. I am so grateful my professor stuck with me and helped me through this. I started understanding class concepts and other parts of the research process. I cut out all the bad parts of my life and accepted the things I could not cut out. The draft application for my research project was due that next week and I managed to only need to make a few corrections before I sent it to the IRB for approval. I even sent it in early, granted only a few days early, but I will take what I can get at this point. I am the happiest I have been since starting the internship. I feel so much better and everything is starting to come together. I am also finally making friends out here, so shout out to those of you who helped me through this!

On the other hand, my community site has always been great! I look forward to going there every day and I do not want to have to leave in November! I work with a school food service program for the school districts in two counties. They partner with a lot of community organizations to improve the nutrition of the students in the districts. These organizations work with us to provide farm to school programs, nutrition education, and create a healthy community just to name a few things. My preceptor is amazing! I am so in awe of her and she makes me excited for my future every day. She is very involved with the State Academy of Nutrition and Dietetics, so I get an inside scoop on how it runs and I love sitting in on her conference calls. Because of her, I want to volunteer for a position with the academy next year. We joke around and she invites me over when her family has parties because I did not know anyone here. I could have never imagined my preceptor would be so accepting and make me feel so welcome. The rest of the office is great and I feel like part of a family there! Like I had said, I do not want to leave. A lot of what I have been doing for the first month or so of interning there was entering and editing recipes in a new menu planning/nutrition analysis program and entering food allergy forms from students. The past couple weeks have been more involved, as I have started putting together presentations for nutrition education for students as well as an in-service for teacher’s aides. We also had a farm-to-school event where we were digging up potatoes and putting on a scavenger hunt for the students at the school that was hosting. This school district has a 4-acre farm right behind the schools, so the students are very involved and seemed to have a lot of fun. I met a cow that was two days old here and totally fangirled over how cute it was! 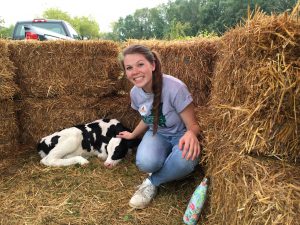 With all that being said, the semester is half over as of next week and I can’t wrap my mind around that. The whole first half I was waiting for it to be over so I would not have to deal with research anymore, but now that everything is falling into place, I do not want it to end. I am a quarter of the way done and I am not ready for it to be over. I am so excited for our clinical rotation next semester, but I want to go back and redo the first part of this semester now that I understand what to do. I want to prove myself again and spend more time at my community site. I am going to try to update this weekly from now on since the rest of the semester will be crazy busy, in a good way, and I am no longer embarrassed about my academic performance. If you read this post all the way to the end, thank you for sticking with me and I will have something much shorter for you next week!